Off-late, of all the jargon and trends of the business and financial world, the one that has baffled me the most has been blockchain or its subset cryptocurrencies. My understanding thus far has been limited which was what motivated me to do some research and try and simplify what it’s all about.

The concept of blockchain is that it is a collaborate technology that acts as an enabler for transactions. The first thing to understand is that blockchain is the parent of cryptocurrencies. The earliest form that we have used this is in the loyalty cards we use at retail outlets. At its core, the concept is pretty simple – it’s a closed network that allows a central entity (the retailer) to track all transactions related to the card holder.

The popularity of this system increased after the 2009 financial crises when trust in the traditional regulators, central banks etc all began to wane. This technology based, trackable, accountable system garnered appeal.

The most renowned of blockchain systems is cryptocurrencies which as the name suggests, is an alternative to traditional currency or money. As a concept, currency has value because they can be reliably counted to have certain value over time without depreciating. Currencies also need to meet certain basic criteria namely scarcity, divisibility, utility, transportability, durability, and protection from being counterfeited.

The execution of the system is through a complex technology whereby each time you get a “coin” and transact, it gets added to towards forming a “block”. Each block is then tracked and added to a larger block or ledger. Think of it as tally marks, so, each tally is a transaction and when you hit the required number or get approval, it becomes a block of tallies and so on.

However, the so far, the value of these alternative currencies are still pegged and benchmarked against traditional currencies. They are like a product in themselves and their value has increased manifold since inception as is visible in the table alongside. This value is of course driven by the increased demand for these currency forms.

One question that I wanted answered most was – how does a cryptocurrency provider like bitcoin begin. The answer lies in a concept called Initial Coin Offering or “ICO”. It is literally, issuing the initial offering of your system in exchange for a more traditional form of currency. So, if a new cryptocurrency has to start up, they could issue their ICO in exchange for bitcoins or Ethereum or even regular US dollars (fiat currency). The people who [ay these bitcoins or Ethereum or dollars are betting on the value of the new ICO rising as it circulates and increases demand. If it does not increase demand, the investors gain nothing. If it does, the value rises as it did in the table able and everyone makes money. 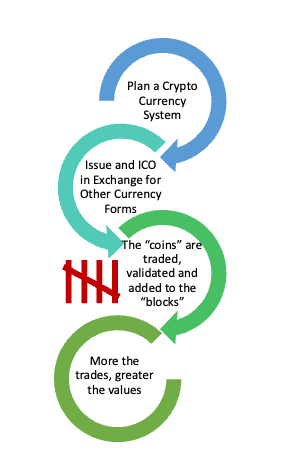 There is speculation that cryptocurrencies could be replace traditional currencies. Time will tell. For now, blockchain technologies are a vast pool of unexplored options that could simplify, streamline and integrate a number of systems – currency or otherwise.

This article was originally published in Bahrain This Months Aprial 2021 issue.